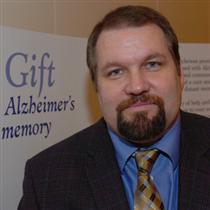 People with Alzheimer’s disease could soon benefit from new treatments, according to a researcher who was in Regina on Monday.

Dr. Gordon Glazner, who was in town to speak at a  fundraising luncheon hosted by the Alzheimer Society of Saskatchewan, said “there’s 15 or 20 drugs now that are in testing phases.”

“In the next five or 10 years, we’re going to start seeing the disease pushed back and be treatable,” he added.

Glazner referred to improved treatments for cancer and heart disease, which have greatly improved people’s chances of living with those diseases, and predicted something similar could happen for people with Alzheimer’s disease. Looking further ahead, Glazner said he expects that researchers will one day discover a cure.

Glazner says he refused to accept Alzheimer’s disease as a natural consequence of getting old.

After earning his PhD at Colorado State University in 1993, Glazner soon began researching Alzheimer’s disease, first in Kentucky and then in Washington, D.C.   In 2001, he accepted a position at the University of Manitoba. According to Glazner, the move was partly motivated by Manitoba’s record of supporting causes like Alzheimer’s research, a trait he says the province shares with Saskatchewan.

“Manitoba had wonderful resources. The charitable giving there was amazing. I thought — and it’s true of Saskatchewan — that if you’re in a population who so supports research like that, it would be someplace really wonderful to work,” he said.

According to Glazner, understanding of Alzheimer’s disease has come a long way since the time of his grandfather’s diagnosis.    “Now it’s quite a bit different… Fifteen years later, we have treatments and there’s a lot of things being done. But it’s because the population is now aging that people recognize Alzheimer’s disease is a major killer,” he said.   “Eighty years old is no longer particularly old … We, as scientists, believe that 110, 120 is sort of our life span and that’s a long way from 80. That’s what it should be. You should be pushing people as far out as you possibly can.”

According to the Alzheimer Society, the disease affects one in 13 Canadians over the age of 65, or about 450,000 people. With Canada’s aging population, the society predicts that 750,000 Canadians could suffer from Alzheimer’s or related diseases by 2031.

January is Alzheimer’s Awareness Month and the luncheon was one of the society’s major local fundraisers planned for this month. The society is also organizing its seventh annual Forget-Me-Not Walk, which is scheduled for Jan. 27 at the Regina SportPlex.

Talks from the greatest neuroscientists working on movement circuits